BRIEF HISTORICAL SUMMARY :
In USA and Canada white shepherd dogs have gradually become to be accepted as a distinct breed.

The first dogs of this breed were imported into Switzerland in the early 70ies. The American male “Lobo”, whelped on 5th March 1966, can be considered as the progenitor of the breed in Switzerland. The descendants of that male registered with the Swiss Stud Book (LOS) and other white shepherd dogs imported from USA and Canada, gradually multiplied. There exists now a big number of white shepherd dogs, pure-bred, over several generations, distributed throughout Europe. For that reason, since June 1991, these dogs have been registered as a new breed with the appendix of the Swiss Stud Book (LOS).
GENERAL APPEARANCE :
A powerful, well-muscled, medium-sized, white shepherd dog with erect ears, double coat or long double coat or long double coat; elongated shape; medium sized bone and elegant, harmonious outline.

HEAD :
Strong, dry and finely chiselled, in good proportion to the body. Seen from above and from the side wedge-shaped. Axes of skull and foreface parallel.

NECK :
Medium-long and well muscled, with harmonious set on at the body, without dewlap; the elegantly arched neckline runs without disruption from the moderately high carried head to the withers.

BODY :
Strong, muscular, medium-long.
Withers : Pronounced.
Back : Level, firm.
Loins : Strongly muscled.
Croup : Long and of medium breadth; from the set on gently sloping to root of tail.
Chest : Not too broad; deep (about 50 % of the height at the withers); reaching to the elbows; ribcage oval; well extending to the rear. Prominent forechest.
Belly and flanks : Flanks slender, firm; underline moderately tucked up.

TAIL :
Bushy sabre tail, tapering to the tip; set on rather deep; reaching at least to the hock joint; at rest, it hangs either straight down or with a slight saber-like curve in its last third part; in movement carried higher, but never above the topline.

GAIT :
Rhythmical sequence of steps with even drive and enduring; front legs reaching out far, with strong thrust; trot ground covering and easy.

HAIR :
Medium length, dense, close-lying double coat or long double coat; abundant undercoat covered with hard, straight protection hair; face, ears and front of legs are covered with shorter hair; at the neck and the back of the legs the coat is slightly longer. Slightly wavy, hard hair is permitted.

FAULTS :
Any departure from the foregoing points should be considered a fault and the serious- ness with which the fault should be regarded should be in exact proportion to its degree.

· Slight deer colour (light yellow or fawny shading) on eartips, back and upperside of the tail.
· Partial loss of pigment of flecked appearance on noseleather, lips and/or eye rims. 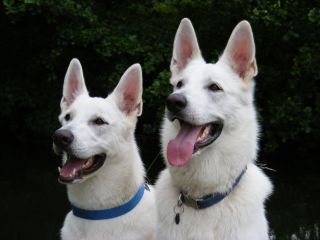